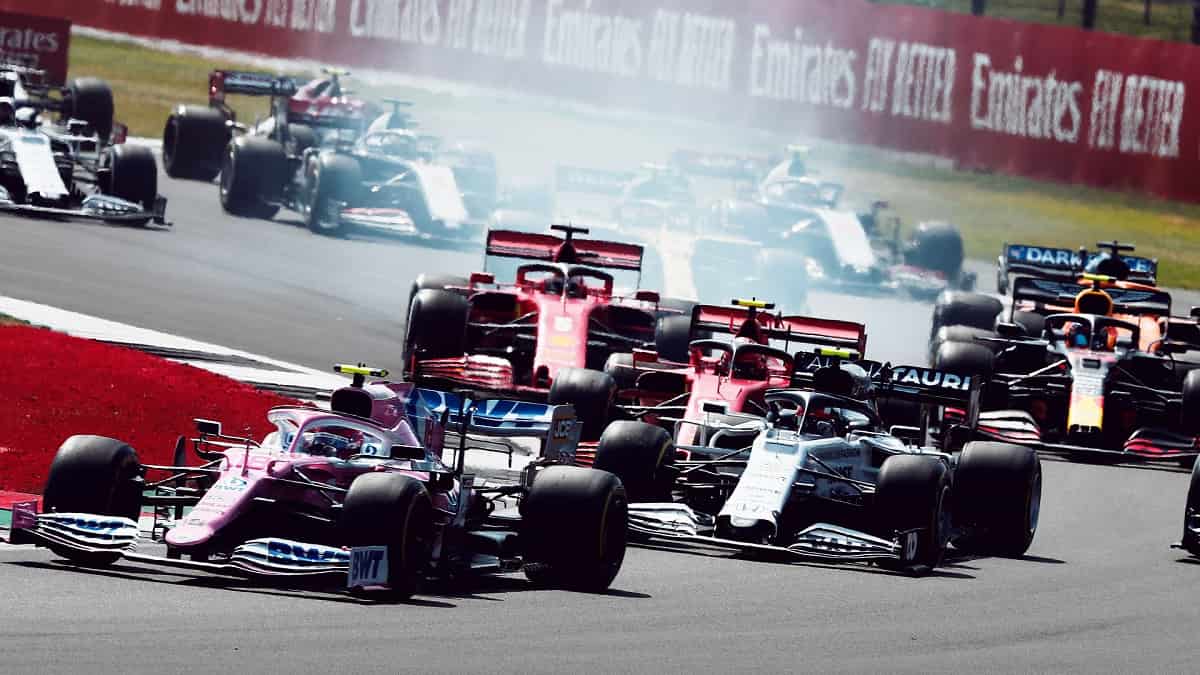 Before we get into the nitty-gritty though, we wanted to give you a flavor of what we will be discussing.

To begin, we’ll kick off with a question about whether or not fans will be in attendance, then it is a quick overview of the track before we spend some time commenting on the new race format, which has only recently been approved.

From there, we’ll be moving on to the race itself. In this section we will talk about who we expect to win along with some other betting tips and finally, we will draw to a close with a brief history of the Great British Grand Prix.

If that sounds like it will get your motor revving then, please, read on.

Will fans be attending?

That’s right, before we get down to talking about what the drivers can expect from the tarmac we need to mention the fans. For a long time, it was unknown whether there would be a few fans present or no fans at all.

Well, the results are in and it’s great news; in June the UK government decided to approve Silverstone as a pilot event in their ongoing battle against Covid-19; this means the event organizers are expecting 140k in attendance for the race.

That is a seriously welcome addition to a race that played out behind closed doors last year.

It’s even more noteworthy when you consider that Silverstone is deemed to be one of the best events in the calendar for crowd atmosphere. It will be absolutely bouncing after the last 16 or so months.

(About the ‘It’s coming home’ remark… that one did not age well).

Anyway, we, like most, are delighted that the fans are attending but now that we are all on the same page, we move to the race. So, what twists and turns can the capacity crowd expect to witness from the Silverstone track?

Well, for starters, the track from start to finish is just shy of 6 km making it one of the longest tracks on the F1 calendar and within that, there is a total of 18 turns that vary in risk and complexity.

The grid will line up just ahead of the Club Seating Area on turn 18 meaning the drivers will burst off down Hamilton straight through to the right branch at Abbey and, not long after, a shallow left at Farm.

After that, the race will see the first real hard braking as turn three shunts left and immediately into the tightest right turn on the track.

A smoother left follows and then, boom, welcome to the DRS zone; officially, that stretch is the Wellington Straight and the prospect of some overtaking here is very high before turn seven – a hairpin right – poses a challenge.

Turns eight, nine, 10, 11, 12, and 13 follow in a section of track that runs from Luffield, past Copse, and through to Becketts with the ability to really kick through what are probably the gentlest corners on the circuit.

After that, it’s all about hitting the back straight – named Hangar. It’s the biggest straight at Silverstone and with just two major turns and a pair of more kind ones remaining, it’s the last real opportunity to ‘take a chance.

What is the new race format?

If you hadn’t seen the news, on July 8th the World Motor Sport Council approved plans to amend the racing weekend.

Friday evening will see qualifying take place, which is just a minor change to the process, whilst Sunday remains unchanged; the race will be the race as we know and love it.

What is majorly different is Saturday. Ordinarily, the drivers can punch through as many laps as they want with the fastest time banking pole position and so on.

For Silverstone – and a couple more races this season – that’s no longer the case. Instead, drivers will take part in a 100km sprint race to decide who takes first place on the grid.

It’s fair to say the drivers are unconvinced about the new format with Lewis Hamilton, whose home race is Silverstone, describing the sprint race as something that he does “not particularly” harbor high hopes for.

Then again, the Brit has dominated qualifying in recent years so perhaps the change is less welcome for him than others. Time will tell.

That last sentence is true to the future of these sprint races too. Silverstone is the inaugural guinea pig but another two tracks will serve as a deeper trial.

If they go well from a logistics angle, the drivers’ perspective, and offer entertainment value for fans then the Saturday sprint races will become a permanent fixture from the next campaign.

Who will win the first sprint race?

At this moment in time, it’s a tough prediction to make with the grid order for that sprint to be decided by Friday’s qualification drive.

Even so, you’d be fairly safe to back one of Hamilton or current leader Max Verstappen to secure a pole position for Sunday.

That said, there are a few names that might be looking at the 17 laps mini race thinking they could sneak it; they include the likes of Sergio Perez, Lando Norris, and Valtteri Bottas.

Charles Leclerc will be amongst that cluster just behind the big two as well.

Who will win the actual race?

Again, as with our predictions for the sprint race, this could be impacted by the qualifying events but the two standout names are obviously Hamilton and Verstappen; it’s the latter who leads the betting odds though.

The Red Bull man has won the past three races to open up a 32 point lead in the drivers’ championship and also won the circuit last year.

That said, Hamilton has never been one to roll over and his record at Silverstone is impressive; he’s won the race six times since 2014.

If you’re looking for a leftfield pick, there are a couple of names that might interest you as well though.

You could take a walk on the romantic side and back Norris. Like Hamilton, Silverstone is his home Grand Prix and he’ll be confident heading into the weekend.

Last year – in only his second crack at the British circuit – Norris finished the race a highly respectable fifth whilst he grabbed a podium finish last time out in Austria. Valtteri Bottas and Daniel Ricciardo are two others that have a reasonable record on the track.

Of course, those last few names mentioned might look a bit of a stretch to clinch the first spot; don’t forget though, there are betting markets available for the podium and it’s completely plausible that any of the three ‘long shots’ complete the race in the top three.

Whatever your thoughts are on the big race, you can place your bets with the CoinPoker sportsbook.

A brief history of Silverstone

Silverstone is called the home of British Motorsport; it would be easy to think that’s just a throwaway phrase used to describe the track. It’s not.

The circuit has a long history spanning back to just after the Second World War; during the war, the location was home to the RAF and a couple of years later a group of lads thought the runways would make a good place to thrash cars around. As it turns out, it was.

By 1948, Silverstone was hosting its first-ever Grand Prix. The race was dominated by Maserati duo Luigi Villoresi and Alberto Ascari, who finished first and second respectively. Behind them, it was British man Bob Gerard.

Of course, over the years the track has been redeveloped somewhat with the original layout vastly different from what we see today. In fact, there have been a total of 10 adjustments made to the circuit over the years; 1994 and 1997 saw sizeable alterations in the wake of the death of Ayrton Senna but the biggest change was unquestionably in 2010.

That development put the track as we know it today with the key changes being the introduction of what we now know as turns one through five and, most notably, the stretch of DRS authorized track.

On the subject of Silverstone history, we thought it would be nice to end on a ‘did you know‘, with the track that has been home to several eyebrow-raising moments throughout its existence.

Here are our top three facts that might have escaped your attention:

One of the biggest pile-ups

Back in 1973, Silverstone saw a first-lap collision that ranks amongst the worst ever seen in F1.

South African driver Jody Scheckter lost control of his McLaren at Woodcote corner; he spun out causing 11 drivers to retire. There were calls for the ‘madman’ to be suspended.

The arrival of the turbo engine

Four years after the Scheckter incident, Jean-Pierre Jabouille took to the British Grand Prix in a Renault sporting a turbo engine.

It was the first time ever and helped to change the sport forever.

Hamilton is the man to beat

For a long time, two-time World Champion Jim Clark held the record of most Silverstone wins with five. They came in a six-year spell during the sixties.

That’s a record that will take some breaking; of the current drivers, only two other drivers have multiple wins. They are Seb Vettel and Fernando Alonso – they’ve won it just twice each.

There you have it, our guide to Silverstone 2021. Whether you back up Hamilton for another home win or you are expecting someone to defy the odds, the British Grand Prix is always a main event in the F1 calendar.

So, enjoy the racing, and don’t forget to bet on CoinPoker‘s sportsbook if you like Formula 1. You can bet on dozens of other sports too. Check it out!