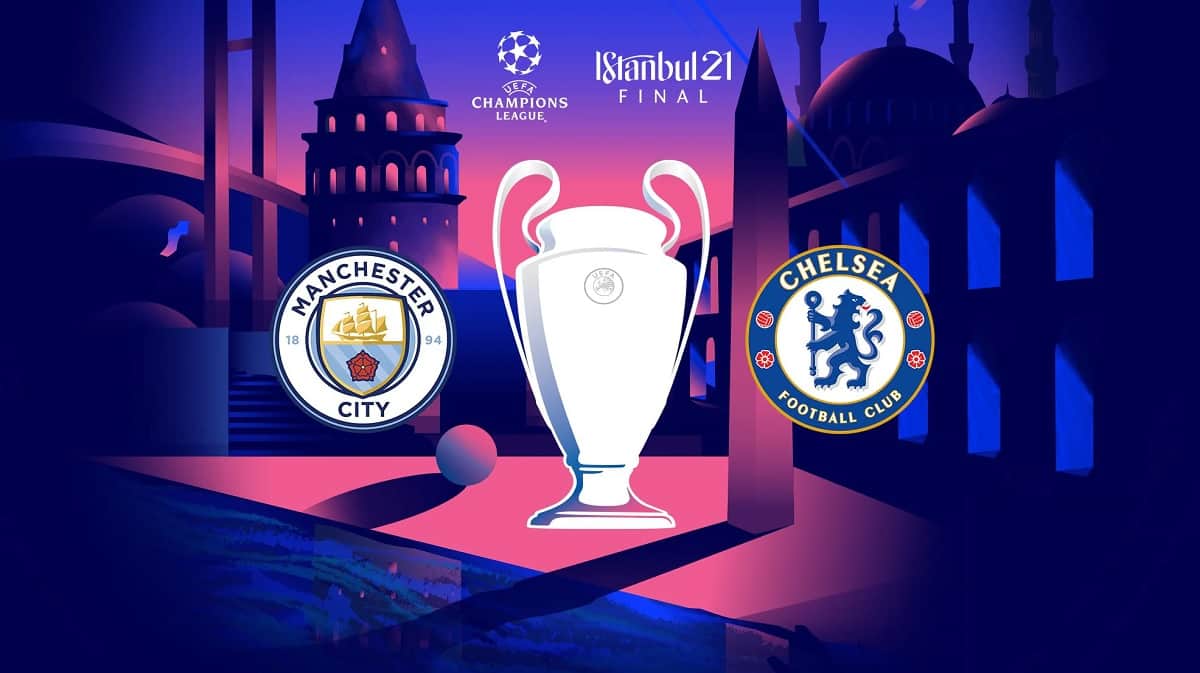 We reached the last stage of the competition and now everything is going to be decided in a single match. Manchester City or Chelsea, who is going to be the winner of the Champions League 2021?

The semifinals of the Champions League were completely dominated by English teams and both booked their place in the final.

Opposite to what we predicted in our semifinal preview, Manchester City didn’t bottle it this time and Chelsea was able to sustain the strong defensive power they had been showing recently.

Meanwhile, Manchester City managed to reduce PSG to a mediocre side – the second-best scorer of the competition, Kylian Mbappé, had no shots on target in the first leg. Mostly to Ruben Dias credit, who kept the PSG forward under control.

The final will happen on the 29th of May. It will be the 6th time that the Champions League final involves two teams of the same country – all of them happened after the year 2000.

It was just two years ago when we last had a final involving two teams of the same country. At the time Liverpool and Tottenham faced in a quite boring match that ended with a 2-0 victory for Jurgen Klopp’s men, over a Tottenham side that seemed pretty harmless all game.

Two years later new final between English sides, but this time it involves 2012 winner Chelsea and a debutant: Manchester City.

They never featured in a Champions League final and this is the first time Pep Guardiola arrives at this stage since he left Barcelona. Pep won two Champions League titles with Barcelona (in 2009 and 2011) and never lost any European final.

So, what are the key takeaways to analyze before this final?

The Ataturk stadium in Istanbul was set to be the Champions League venue for the final. However, due to the COVID-19 situation in Turkey and the restrictions the English government has for people coming from that country, it seems unlikely that it happens now.

If the players travelled to Turkey for that game they would have to self-isolate for 10 days after returning, which would be a problem considering most of them will join their national teams soon after for the Euro 2021.

So, there are 2 options that UEFA is still considering and should be decided in the next few days. The first one is Wembley, in England, which seems like an ideal venue considering both teams are English and therefore players and staff wouldn’t need to travel abroad.

So, what’s the problem? Well, Wembley is already booked in the 29th of May for the Championship Playoff final, that decides the last team to be promoted to the English top flight. The EFL doesn’t want to reschedule or move the venue and UEFA is looking for an alternative.

The second option is neutral ground abroad. The Estadio do Dragao, in Porto (Portugal), looks the most likely option. Portugal already received the final last year – in Lisbon – and UEFA seems inclined to repeat the hosting country, only switching the location up north.

Portugal has eased up their COVID restrictions and English citizens are now authorized to travel to the Iberian country. The decision should be made in the next few days and we are still waiting to know if any fans will be able to attend.

Chelsea and Manchester City have no shortage of superstar players and there are a few names that can shine on the 29th of May.

However, we chose to highlight two midfield maestros who will be directing the operations on that Saturday night.

There aren’t many players in the world who can do what N’Golo Kanté can.

The 5 ft 6 in Frenchman bosses Chelsea midfield and, despite his height, Kanté won all his aerial duels in the 2-0 win of the Blues against Real Madrid.

His pass success percentage of 86.5% also shows how he never loses control of the ball and is always capable of finding the space to release the ball to a teammate.

A World Cup winner with France, N’Golo has reached his career maturity at 30 years old and he is at the peak of his form right now.

Manchester City will have to neutralize him if they want to hold a chance of lifting the cup.

There are many players who we could highlight here. Sergio Aguero, who promised 8 years ago that his last game for the club would be the Champions League final, will definitely want to leave his mark before he departs from Manchester this Summer.

Kevin de Bruyne, if his fitness issues are solved by the end of the month, will also be crucial for the team. However, we have to highlight Kanté’s former teammate: Riyad Mahrez.

Mahrez rose to the occasion once Kevin was left injured in the semifinal of the English FA Cup. The Algerian international brought creativity to City’s midfield in the Champions League semifinals, scoring three times in the 2 games against Paris Saint-Germain.

Known for his versatility, Mahrez is a modern player who doesn’t shy away from helping in defense, with 20 ball recoveries in this Champions League campaign and 1.2 tackles per game. Riyad Mahrez can play in the wing or in the center of the midfield, giving enough options for Guardiola to adapt the Algerian talents wherever they are most needed.

So, who should you bet on?

It’s a tough call since the Champions League is a single match and anything can happen in 90 minutes (or 120 if the game ends in a tie). However, we will be inclined to Chelsea this time for a couple of reasons.

First and foremost, Chelsea has proven this season that they can tame Manchester City. Not once, but twice.

The Blues eliminated Manchester City from the FA Cup (1-0) and just last weekend they postponed the Citizens champion parade: a 1-2 away victory in the Etihad Stadium, with a late goal from Marcos Alonso.

Thomas Tuchel who arrived in the end of January to replace Frank Lampard has been doing an impressive job as Chelsea’s manager. Not only has he stabilized Chelsea’s defense, but he was able to bring back the team’s spirit and talent that seemed dim under Lampard.

Secondly, Pep Guardiola will be in his third Champions League final, but for Manchester City it’s the first in their history. Will they be able to overcome the pressure and lack of experience at this stage?

The Citizens won all the games so far in the competition, except one (0-0 against Porto in the group stage).

Curiously enough, Porto was also the only team who managed to defeat Chelsea (0-1), even though they ended up eliminated in the quarter-finals.

Here you have our preview for the Champions League final. Two English sides, two midfield maestros and two managers who have enough experience to create an intense spectacle.

Tell us your prediction and bet on CoinPoker’s sportsbook today. Who are you backing up to be the Champions League winner? Manchester City or Chelsea?