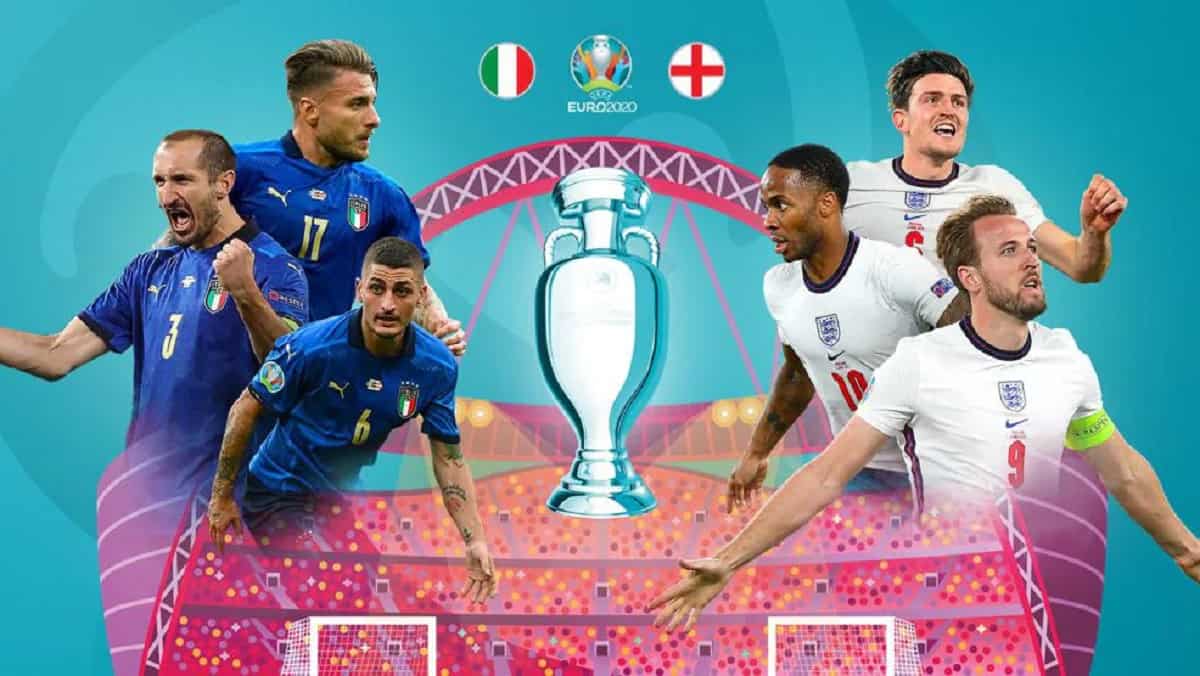 We finally arrive at the last stage of the competition that lasted a whole month. It was an intense one, with great goals, last-minute winners, extra time drama, and penalty shootouts. Now it all resumes to one last match, played at Wembley this Sunday: Italy or England, which nation will be crowned Euro 2020 champion?

There are now only 2 teams standing from the 24 that started this Euro 2020. Italy arrives at this final after beating Spain in an intense penalty shootout, that saw the Azzurri qualify to a Euro final 9 years later. It’s also 15 years since their last major tournament win, the World Cup 2006, that they won over France.

Meanwhile, England is a debutant at this stage of the Euros. In fact, they are in a final of a major tournament 55 years after their last one, the World Cup’ 66.

On the brink of history, the English can also be proud of arriving at the tournament’s last game with the best defensive record in the competition. Only one goal suffered, against Denmark in the semifinal.

Sure, that extra-time penalty kick goal against the Danish was controversial, to say the least. Despite the VAR check, it seems dubious whether there was contact there.

Still, take no merit from Gareth Southgate and the Three Lions, who dominated most of the game and were unlucky to not have been victorious during the 90 minutes.

So, now we have an unexpected final between two countries which, one month ago, weren’t even in the top 3 of favorites to win the tournament.

Will Italy get the second Euro trophy in their history (the first one was in 1968), or instead, we will see the English lift their first one ever?

To dig deeper into who has the leverage in this important and historical match, we must look at the previous fixtures between the two countries represented here.

According to 90min, the two nations faced already 27 times before: the Italians have the upper hand with 11 wins. England won 8 times and the other 8 times it ended in a draw.

In the last 10 years, the Italians and the English faced twice in major competitions. The first time was in 2012 when the Azzurri met the Three Lions at the Euro’s quarter-finals.

The game was decided in a penalty shootout. A memorable ‘Panenka’ penalty converted by Andrea Pirlo booked a semifinal place for Italy and another early exit for England.

Two years later both nations met again, this time in the 2014 World Cup in Brazil. They were drawn into the same group and the Italians were victorious again, thanks to a header from Mario Balotelli.

However, both countries didn’t get past the group stage that year, missing out against Costa Rica and Uruguay.

As relevant as this data seems, the previous fixtures are nothing but memories. The English have a completely new generation from that 2014 fixture (only Sterling, Henderson, and Shaw remain).

It’s also very important when placing your bet to consider the managers on the sidelines. As we saw throughout this tournament, an experienced thoughtful coach can make a huge difference.

The right substitution is crucial, considering how this tournament is played with high-intensity games and very limited resting time between games.

Italy is led by Roberto Mancini, who did not have an easy job after the Italians missed on the last World Cup.

The miserable spell from previous coach Gian Piero Ventura, who lost out on the WC playoff against Sweden, is a page that the Italian tifosi are not keen on remembering.

Comparing with the previous manager, Roberto Mancini’s time commanding the Italian team has been nothing other than extraordinary.

Italy doesn’t lose an official game since September 2018 (Nations League clash with Portugal) and they topped their qualifying group to the Euro 2020 with 10 wins, 0 draws, and 0 losses.

They were then drawn into group A with Turkey, Switzerland, and Wales and they managed to win all 3 games, with 7 goals scored and 0 conceded.

Mancini’s tactical approach has been praised, but it’s no surprise considering his resume.

Roberto won trophies as a manager in Italy, England, and Turkey, including the Serie A twice (Sampdoria and Lazio) and the Premier League (with Manchester City).

In terms of experience, Mancini beats his English counterpart, no doubt. Plus, he surrounds himself with other experienced assistant managers, like Gianluca Vialli, who played alongside Mancini when both were still players.

Mancini doesn’t use the usual Italian style of defending (with 3 center-backs). He chooses instead to align a compact 4-3-3 with two defensive midfielders in Jorginho and Verratti.

The thing about Italy is that all the team defends together and attacks together, thus creating an unbearable aggressive pressure that results in the opposing team making mistakes.

When Southgate was appointed England’s manager in 2016 the choice was not unanimous. Bear in mind that England had just fired Roy Hodgson, following an embarrassing tournament exit against modest Iceland.

His only previous managerial experience had been at the helm of Middlesbrough, where he was dismissed in 2009, leaving the team just 1 point below promotion to the Premier League.

Taking over Roy wasn’t easy, as English fans were massively disappointed at how their team had been managed and the pressure was huge.

Especially considering the massive amount of talent that the country has produced in the last years. If you have the right tools, why does the England national team underperform constantly?

Southgate won the Toulon tournament in 2016 as an under-21 manager and he knew quite well the quality of these young players.

His task was mostly about renovating the team and giving a correct role to players like Harry Kane and Raheem Sterling, who had been misused in the past.

His resume in 5 years is impressive: England achieved two competitions semi-finals (World Cup in 2018 and Nations League 2019) and they broke the spell for the penalty shootout curse, against Colombia.

England arrives at the Euro final with barely any goals conceded, completely wrecking Ukraine in the quarter-finals (4×0) and obliviating Germany in the round of 16 (2×0).

Tactic-wise, Gareth uses a 4-2-3-1, with the midfield providing a solid consistency and supplying the target man Harry Kane. The key to their success is the game they play through the wings, with the help of the fullbacks going forward, as shown for Luke Shaw’s 3 assists so far.

As obvious as it sounds, it is essential for any team that wants to win the Euros to have a world-class goalkeeper. One that can put the team back in the game with extraordinary saves.

We saw in the Euro 2016 final how Rui Patricio repelled over and over France’s attempts on goal and eventually those proved as matchwinning saves.

Funnily enough, back in the 2019-20 season, these two goalkeepers were on the news for having the worse stats on their respective leagues.

Pickford had conceded the highest number of goals (46) and Donnarumma had registered the higher number of ball drops in Serie A (4).

The Golden Glove trophy is at stake and Pickford can grab it even if England loses (for less than 1 goal).

In total, Pickford has made more saves than Donnarumma through the tournament. The Englishman has made 11 stops and Donnarumma made 9.

Who do you think will shine brighter at Wembley between the posts?

There are a number of key players, besides the two goalkeepers mentioned, that can make a difference on Sunday.

We won’t mention the obvious ones. For England, Harry Kane and Sterling have been in stellar form. The Manchester City winger has scored 3 times and Kane 4. Both players are still in the run for the golden boot, which is still topped by Cristiano Ronaldo (5).

In Italy, the stars are the defenders: Bonucci and Chiellini bring experience and an aggressive approach, captaining the youngsters and guiding them by example.

So, who are the two major breakout stars from these two teams during the Euro 2020?

There are many of England’s unsung heroes that we could praise, like Mason Mount and Luke Shaw who are showing solid performances game after game.

However, we choose to highlight someone who is just 19 years old and has been destroying opponents back and forth in this competition. We are talking about Arsenal’s versatile midfielder Bukayo Saka.

Saka can play in any position in the wings, including as fullback if needed. His incredible pace and game vision combined make him a very dangerous player to face.

In the semi-final, Saka was vital for England’s aspirations, as he created chaos and eventually ‘assisted’ the own goal scored by Simon Kjaer.

Bukayo has only started for the English on the knockout stage, but it has proven to be a solid choice by Gareth Southgate, looking at the impact that the youngster has created immediately. We wouldn’t be surprised if Saka gets elected the best Young Player of the tournament.

Son of a former Italian legend, Enrico Chiesa, Federico is honoring the legacy of his father.

The winger, who plays in Juventus, has been the bread and butter of Italy’s attack, scoring important goals when most needed (against Austria and Spain).

Chiesa’s finishing is not even his best quality, but his composure in front of goal, not hesitating for a second under pressure.

His pass accuracy is higher than 80% and he creates 3 big chances per game.

However, Federico’s qualities don’t end on the attacking side, as he wins most of the duels through the ground against defenders.

As Italy’s attack is all about quick and well-timed counters, Federico will be an essential player to break England’s backline. He is a very difficult player to man-mark, as Chiesa shoots with both feet and has good shot from distance.

By the end of this analysis, you might be wondering: “Who will win the UEFA Euro 2020?”

It’s quite impossible to predict what is going to happen, as many external factors can happen during 90 or 120 minutes (injuries, individual moments of brilliance, etc).

If we had to analyze only based on the tournament itself and the past performances of the teams we would say Italy has the upper hand here.

They have a more experienced manager and a team filled with leaders to inspire the younger generation.

They will need to be more aggressive and don’t stop the pace of the game, like they did against Spain on Tuesday.

England, on the other hand, has a point to prove and a whole country expectant on a major tournament win that they are eager to see since 1966. Is it coming home?

Well, we are not ruling that possibility out but the English will have to do a perfect game to catch the Italian defense off guard.

Their focus should be on using the speed of their wingers and fullbacks to confuse the aged center backs of Italy.

Who do you think will win? Check out CoinPoker’s sportsbook and bet on the match winner and the top scorer of the tournament.