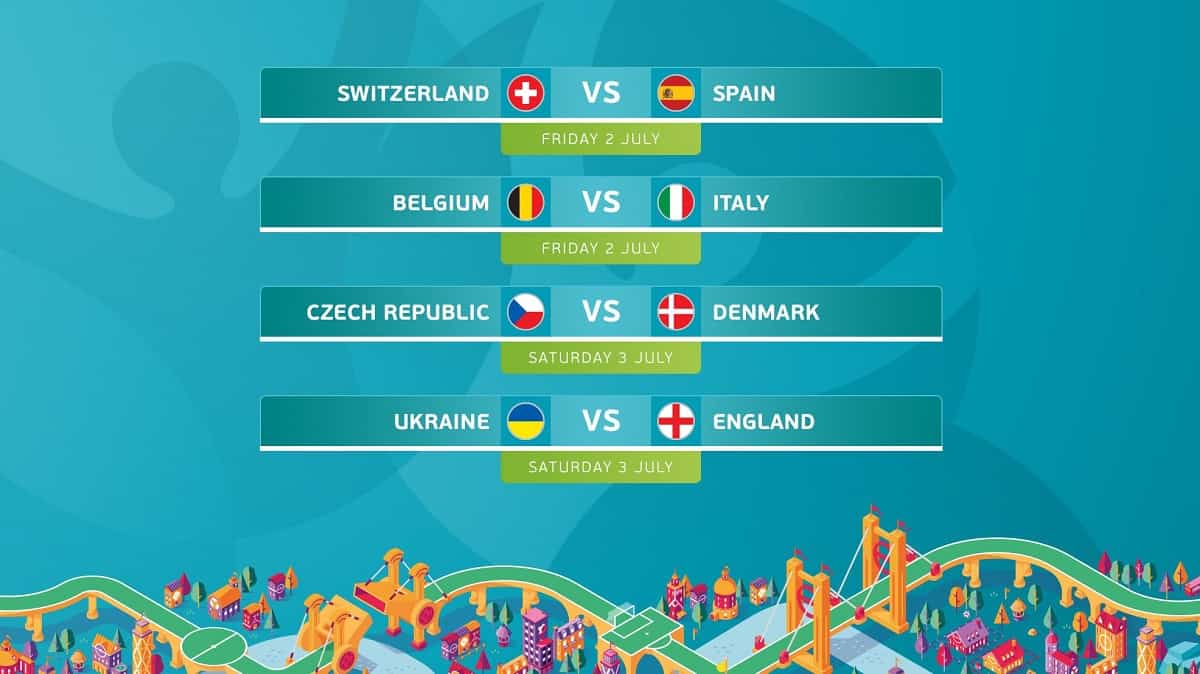 We didn’t have time to breathe since the group stage of the UEFA Euro 2020. The round of 16 that followed left us speechless, with many games going to extra-time and World Cup winners France knocked out in the penalty shootout. What we should expect next?

Remember that whole talk about the group of death in UEFA Euro 2020? Well, turns out that none of them survived the round of 16.

France, who was the heavy favorite to win it all (World Cup winner after all) unexpectedly crashed out after a penalty shootout defeat to Switzerland.

Last tournament’s winners Portugal didn’t have the same luck as last time and also miss out on the quarter finals for the first time ever, after a narrow defeat to Belgium.

And if you had your hopes on Germany, well it seems like Joachim Low ended his reign at the helm of the Mannschaft with yet another disappointing tournament.

The Germans were surprised by England in a confident show from the men coached by Gareth Southgate. Is football coming home? So far it looks like the English paved their way to reach the first final ever in the Euros.

However, we saw the favorites flop before, so don’t put all the eggs in that basket.

Quarter-Final Previews: Who Will Make It Through?

We have 8 teams still standing and a couple of favorites already missed out: 3 of them at least. France, Germany and Portugal were in the top 6 to win it all but they have exited the tournament already.

Italy, Belgium, Spain and England are the ones leading the odds, but it’s certain that one of them won’t make the semi-finals.

Let’s take a look at the upcoming matches.

There were 3 teams who made the perfect group stage: Italy, Belgium and Netherlands. All of these nations won all their games, but the Dutch disappointed in the round of 16.

Opposite to Netherlands, Italy and Belgium confirmed their favoritism and now they will battle in what will be the headline of the quarterfinals.

The Italians scored 11 goals so far and suffered only one (against Austria in ET). Meanwhile, Belgium scored 8 goals and also suffered a single goal (vs Denmark in the group stage).

Both teams have exhibited a solid defensive consistency, with the Italians coached by Roberto Mancini being led by veterans Bonucci and Acerbi.

Belgium also has experience in their backline through Vertonghen, Alderweireld and Vermaelen.

The Red Devils defeated the current holders, Portugal, with a stunner from Thorgan Hazard. They did have their fair share of luck, but luck is part of this game.

We predict this contest to be taken to ET or penalty shootout. It will be a tight affair decided in a detail, but the Italians right now look stronger and more experienced.

Backing up the Azzurri, we pick Italy to go through.

It looked like an easy route for France into the quarter-finals. Group F winners, they were predicted to pass easily through Switzerland who ended 3rd in their group.

However, although the Swiss demonstrated an intense show of perseverance and even after being 2 goals down, they did not give up. Gavranovic last-minute equalizer took the Swiss into extra time and then to penalties.

In the first penalty shootout of the EURO 2020, Mbappe lost the battle against goalkeeper Yann Sommer and the Swiss made history. This is the first knockout win ever for Switzerland across any competition.

Will they go further than this? Their opponent right now is Spain and they also had to suffer to qualify to the quarters.

Similar to France, they allowed their opponent Croatia to come back after being 2 goals up. However, opposite to the French, the Spanish were stronger enough to score twice in extra time and send Croatia home.

Will Spain be able to stop the determination from the Swiss? Well, we saw how La Roja’s defense has shaken during certain periods: they conceded 4 goals so far and their attack is a hit and miss.

Spain will have to be at their best to defeat the Swiss, but we believe they will make it past the quarters and carry on to the semifinals.

Confess: this is a match that you didn’t expect to see in the quarter-finals of the UEFA Euro 2020. And it is why we love football.

The Czech were doomed to elimination by the powerful team of Netherlands, who had won all their games in the group stage.

Nonetheless, as we had predicted in our group stage analysis, Netherlands were expected to qualify from the group but not to go very far. Most of the blame probably goes to De Boer and his reputation (worst coach in Premier League history,).

Sure, a red card for De Ligt kind of helped to sink the ship, but take nothing from the Czech who have been stellar. From their confident opener against Scotland (that goal from Schick still wows us), you could see there was something special about the Czech Republic this year.

Can they repeat the prowess of 2004 when they made the semifinals?

Well, on the other side is Denmark, which did not start the Euros well but was able to bounce back in style. The Danish saw their captain Eriksen leave the tournament in the opening match against Finland, after a heartbreaking tense moment.

They lost that game and the following to Belgium, but a confident last fixture against Russia (1-4) saw them booking a place in the round of 16. Then they absolutely battered Wales in a confident display that shows they aren’t a team to mess around.

We will put our faith in Denmark to keep delivering, so they can dedicate their semifinal place to their captain Eriksen. Christian will be proud of you boys!

Another unlikely match to happen in the quarter-finals. Definitely, England and Ukraine overcame the odds to arrive here.

The English did not need to suffer through another heartbreak this time and they confidently defeated the heavy favorites Germany.

While the Germans seemed quite baffled by England’s energy, Southgate’s men continued their impressive defensive display.

If attack wins you matches, defense wins you tournaments. Most neutral fans are still waiting to see England choke eventually and even confident supporters are skeptical about their future.

Still, they look favorites to march to the semifinal, although Ukraine is not an easy nut to crack. Led by Shevchenko we had put them as underdogs to follow in our analysis (let’s not talk about Turkey though).

Ukraine arrived at the round of 16 as one of the worst 3rd placed teams, but they were able to stop Sweden (who had won their group).

Sweden has only themselves to blame after Danielson’s horrible tackle in ET left them with 10 men. Ukraine simply captured on the opponent’s mistake and with a last-minute header booked their place in the quarter/finals.

England’s defensive consistency should be too much for Ukraine to break, but don’t sleep on the blue and yellow men.

Weirdly enough, the current top scorer of the competition is a man whose team was already eliminated. None other than Portugal’s captain Cristiano Ronaldo (5 goals).

We are not expecting for him to hold on for long to that place, with Romelu Lukaku (3 goals) being the current favorite to win the golden boot of the tournament.

Another name that is also making waves, with 4 goals to his name, is Patrick Schick. If the golden boot was attributed to the most beautiful goal he would probably already have it.

It depends whether the Czechs can at least break Denmark’s defense, but it’s worth placing a bet on this one.

From the current list of top scorers, there are other 2 names that still have a chance of topping the goalscorer chart. Raheem Sterling has scored 3 goals so far, as well as Benfica and Switzerland’s striker Haris Seferovic (who scored twice to France).

Looking at England’s path to the final we would place our expectations on Raheem Sterling to take the golden boot. Who do you think will take home this individual trophy?

Bet On UEFA Euro 2020 With CoinPoker

The competition is not over yet, with 7 matches happening over the next week and a half. UEFA Euro 2020 ends on the 11th of July at the Wembley Stadium.

You can get a free bet to use on CoinPoker’s sportsbook during Euro 2020. Simply log in to your account and you’ll find it’s already there.

Use it to predict the winner of the matches or even who will win the whole competition. Perhaps you have a hunch about who will be the top scorer?

Bet with CoinPoker on these and many other sporting events throughout the month of July!