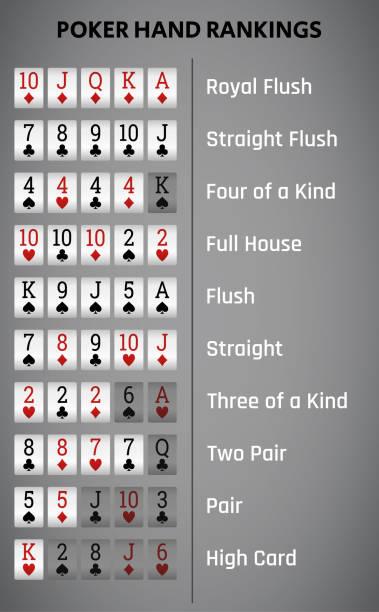 Being a successful poker player is different from being a failure at the game because good players know how to handle setbacks. They don’t become overly emotional and believe the world is ending. They don’t lose their minds and begin chasing losses. The players recognize that failures and defeats make them smarter and better, therefore they accept that everyone makes mistakes from time to time and are motivated to learn from them.

Poker is a game that is usually played with a complete deck of fifty-two (52) cards. French settlers introduced poker to the United States in 1829. It is a gambling game in which the players bet on the best ‘hand’ depending on the specific game type or game rules that have been agreed on before the commencement of the game. Just like any other gambling game, it requires some luck, skill, and an in-depth understanding of the game. As a result, we will be walking you through the various hand rankings that you can come across in a game of poker.

Irrespective of the type of poker you are playing, the end goal is to have the highest-ranking hand, so understanding the details of each hand wields you the weapon to win the game. A poker hand is a collective name given to the cards held by each player at any given time in the game. And different hand ranking systems are used in the different types of poker games.

In this article, we have explained the traditional high poker hand rankings in very simple terms. This is the most popularly used poker hand ranking. It is the most common because the types of poker games in which it is used are the most widely played variation like Texas Hold’em, Omaha, Seven Card Stud, and Five card Draw. The hand rankings from the highest to the lowest are as follows:

Here are the 4 possible combinations;

It is very important to note that in the event of a tie, the player with the highest-ranked cards wins the game. You will not frequently see players aiming to draw the lower-ranking poker hands in Texas Hold’em, Omaha, Seven Card Stud, or Five Card Draw, except if the player is very skillful and very good at bluffing. Usually, people get better at these things as they gather experience in the game. There are currently many channels and avenues for a beginner to gather experience many of which are online platforms. As a result, you can enjoy the game of poker from the comfort of your home.

Poker Hand Ranking At a Glance

In this article, we have been able to briefly take you through the different hands in poker, the different poker hand systems, and the probability of having each of them in a poker game with the standard 52-deck card. The highest ranking poker is the royal flush, it is the most difficult to have and can win you any game played with the highest poker hand ranking system.