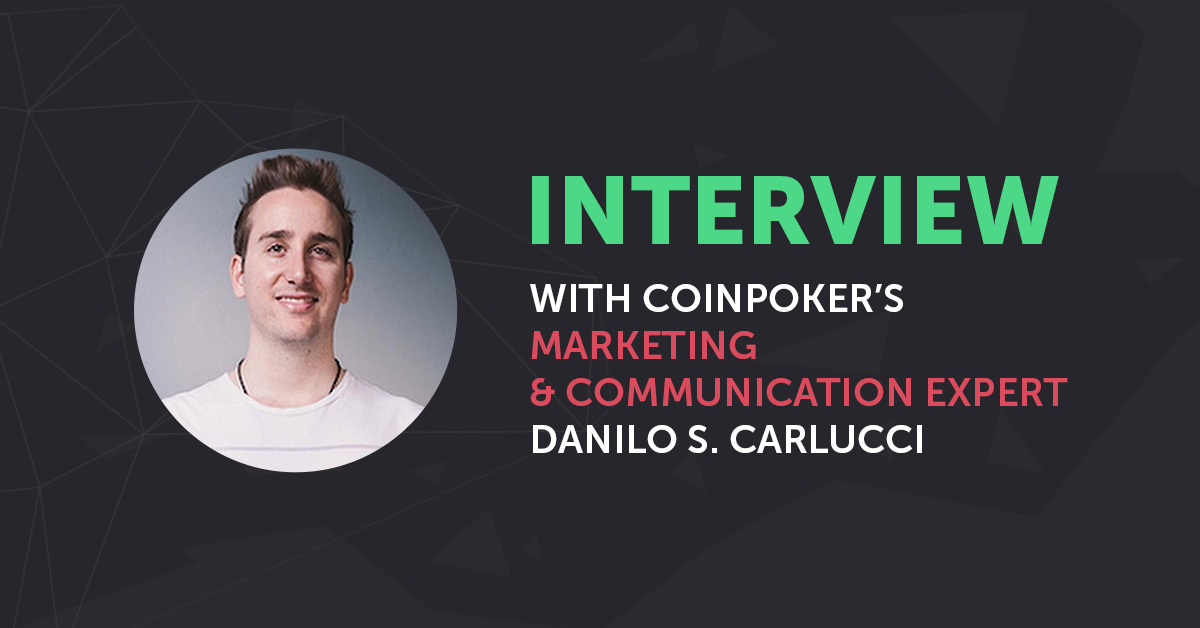 If you are following our project closely, you probably already got to know most of our team and advisors. Today, we welcome you to get closer to Danilo S. Carlucci, CoinPoker’s advisor on marketing and communication as well as an avid poker player and a blockchain enthusiast.

How did you get involved with CoinPoker ICO?

I got involved with CoinPoker ICO via Tony G, an old friend from my poker days. He was aware that I was in the blockchain space for a while and that I have been supporting several projects on the growth and marketing side.

Due to my poker background and my passion for blockchain technology it didn’t take long for him to convince me to join the team, as you can imagine.

What do you like about blockchain technology and cryptocurrencies? What’s your experience in this field and how are you going to apply it in advising CoinPoker?

I first got introduced to blockchain technology when I heard about Bitcoin back in 2011. At that time I have had just abandoned my degree in economics to pursue a career in management.

So, it was only after hearing about Bitcoin that I understood the kind of economics field I was interested in. Besides finding the transparency and decentralization concepts of blockchain technology fascinating, I am also very keen to learn how tokenization can change different industries.

You’re also known as a recurring poker player. How do you think CoinPoker might change the world of poker? What can CoinPoker offer to poker players?

As we all know, the online poker industry has been stalling over the last couple of years. Complicated players’ accessibility due to different regulations and rules in numerous jurisdictions is one of the main reasons given that poker is a game that is most fun when played with a diverse set of people.

With help of blockchain technology CoinPoker allows people from anywhere to play with each other and turn their cryptocurrencies into CHP. In my opinion, the fact that the depositing and withdrawing of your stack is so straightforward is what makes CoinPoker so disruptive.

I am aware that the team is working on continuously improving this process and I have no doubt that CoinPoker will continue growing as a platform and as a community. CoinPoker stands for decentralization, and everything true poker stands for.

Can our supporters play a hand with you in our CoinPoker’s poker client?

Of course. Before becoming an advisor I played several tournaments on CoinPoker because for me, you either love a platform or you don’t.

I think that the CoinPoker software is already enjoyable, so I often spend my Sunday evening playing tournaments. I am not a great cash game player, so MTTs are still the way to go for me.

How does CoinPoker build the bridge between cryptoinvestors and poker players?

I think poker players and crypto investors have a lot in common. They are both entrepreneurial, analytical, hardworking and hungry for success.

CoinPoker is a great tool to turn more crypto investors into poker players (making them to take a break from trading from time to time), and an equally important way to turn more poker players into crypto holders and crypto enthusiasts.

Your role as an advisor for CoinPoker is mostly but not limited to consultation on marketing and communication. What do you think is the most important thing in building brand awareness?

Yes, that’s correct. Since joining the team, I have been putting myself in the shoes of an outsider that is half poker player, half crypto investor (which is a correct description, by the way).

I studied and worked on the white paper and spent lots of time helping the team on making it clear and more concise. My other key responsibilities are presenting the website in the best light by making it attractive and intuitive.

Both of these two elements, the white paper and the website, were the key to building positive initial perception potential investors and players had of CoinPoker.

If those two parts are appealing, users are more likely to download the software and give CoinPoker a try. That’s when the most important part of the brand awareness came into play — the CoinPoker community consisting of players and brand advocates.

Building brand awareness is always a challenge, but having a strong following and loyal community makes it much easier.

Finally, how big do you think CoinPoker community will grow in the next few years?

Seeing where we are today even after the short amount of time that CoinPoker has been on the market, I am very “bullish” (if I can say) in looking forward to the growth of the platform which, I believe, will be substantial.

Do you want to ask Danilo something yourself or you are interested in learning more about what he does? Feel free to follow him on Twitter: https://twitter.com/daniloscarlucci.