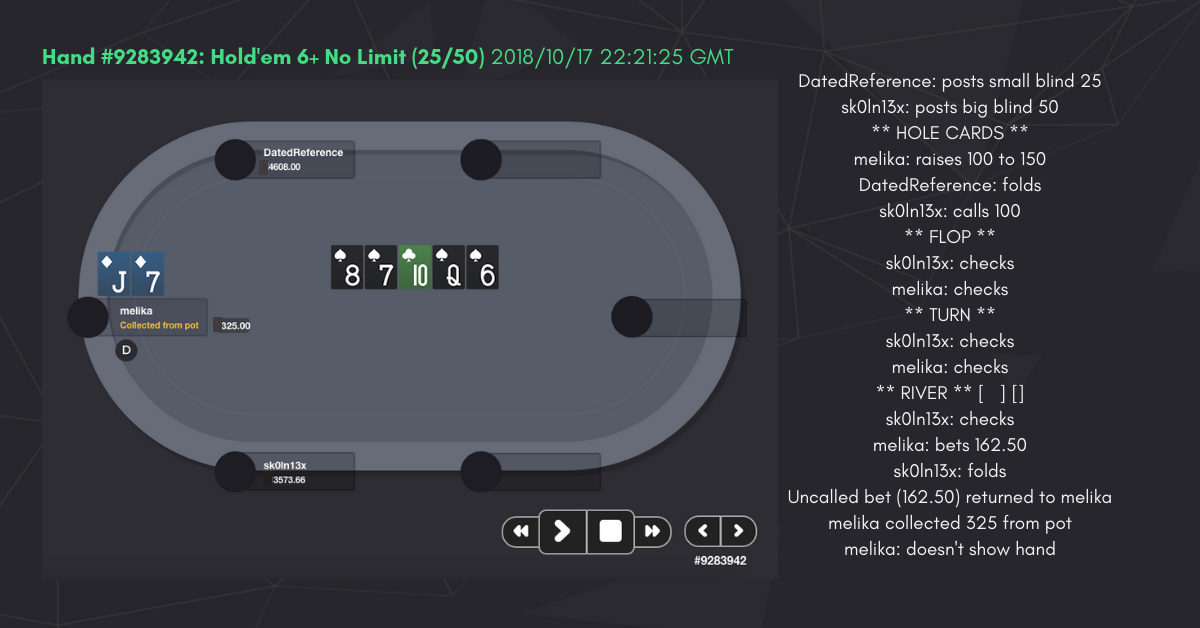 I’m playing a 25/50 Short Deck 3-way when I pick up J7d on the button. All suited hands on the button are a must open in this game, since flush beats a full house. Flush is basically almost always the nuts.

Small blind folds, and “Skolnlex” in the big blind calls my 3x open raise. The flop is 87Tssc and I check (I only have a bottom pair and a gutshot). I’ve got a little bit of showdown value already, and there’s no reason to build a big pot or to bluff.

With pair and a gutshot, I don’t mind seeing the turn and river to win in a showdown with a pair. However, I’d rather bluff on this flop when I have a gutshot without a pair.

Turn Qs goes check-check for the same reason as before, and when the river gives a 6s, a fourth spade, then I have close to zero showdown value. My pair of sevens will almost never win if I check behind, so I have to bet around half the pot to represent a nine to ace-high flush.

My opponent folded, which he should do with any pair, most two pairs, and even some sets and straights are possible if we break down the hand in a solver. 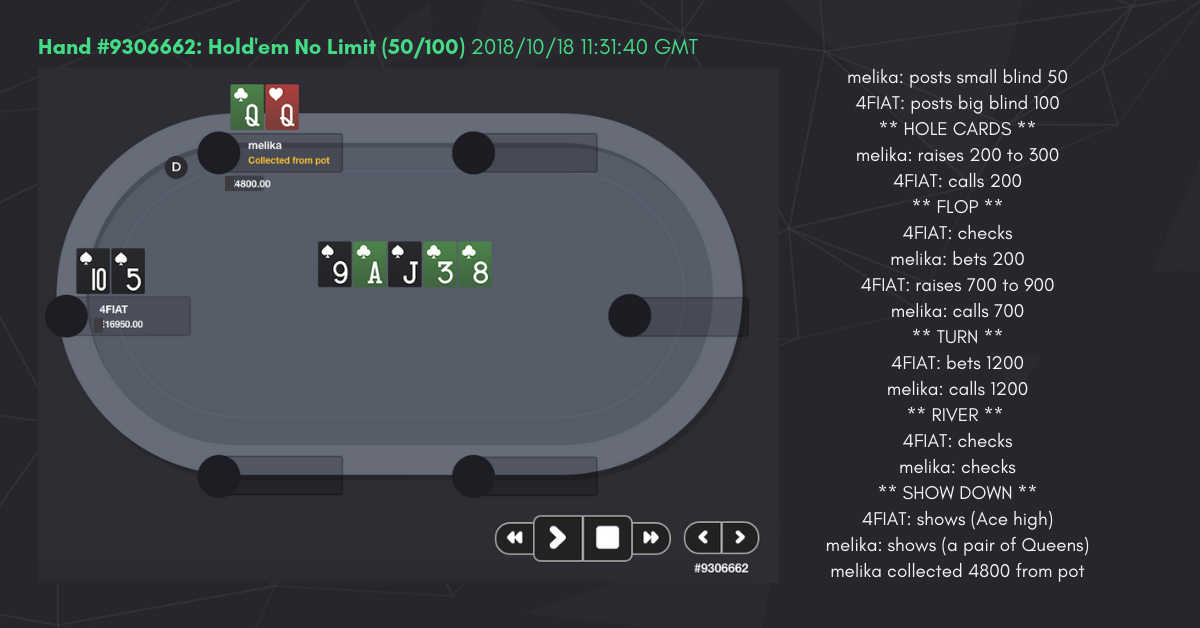 The flop is AcJs9s, “4FIAT” checks and I place a continuation bet of 200 into 600 (1/3 of the pot). A 1/3 cbet size is a size that allows us to have very high cbet frequency. I can cbet very light for value and afford to have many cbet bluffs when only betting 33% of the pot.

Because I assume a 3bet preflop to happen 100% of the time with those hands with these stakes in a heads up match, I decide to call.”

“4FIAT” decides to checkraise this flop to 700 even though he most likely would re-raise AA, JJ, 99, AJ and maybe even A9 suited preflop. Because I assume a 3bet preflop to happen 100% of the time with those hands with these stakes in a heads up match, I decide to call.

The turn is 3c, and now there’s a double flush draw. “4FIAT” bets 1200 into 2400 (1/2 of the pot), and I call. Right now there are a lot of spade draws, club draws, open-ended straight draws, and gutshots that “4FIAT” most likely will have in his range here when he bets again.

I don’t think he will have too many single pairs or double pair Aces in his betting range so it’s an easy call.

The river is 8c and it goes check-check. I win against 10-5 spades with 10 high and a missed flush draw. The 8 of clubs is a card that made me expect 4fiat to continue his already questionable bluffing line.

He could represent Q10 and 10-7 for a straight. He could have also represented some check-raised backdoor club draws from the flop that continued on the turn and had a hit.

I really don’t like that “4FIAT” gave up on this river card. If he would’ve bet 2/3 instead, he would have me thinking for very long, even with my Q blocker for Q10.