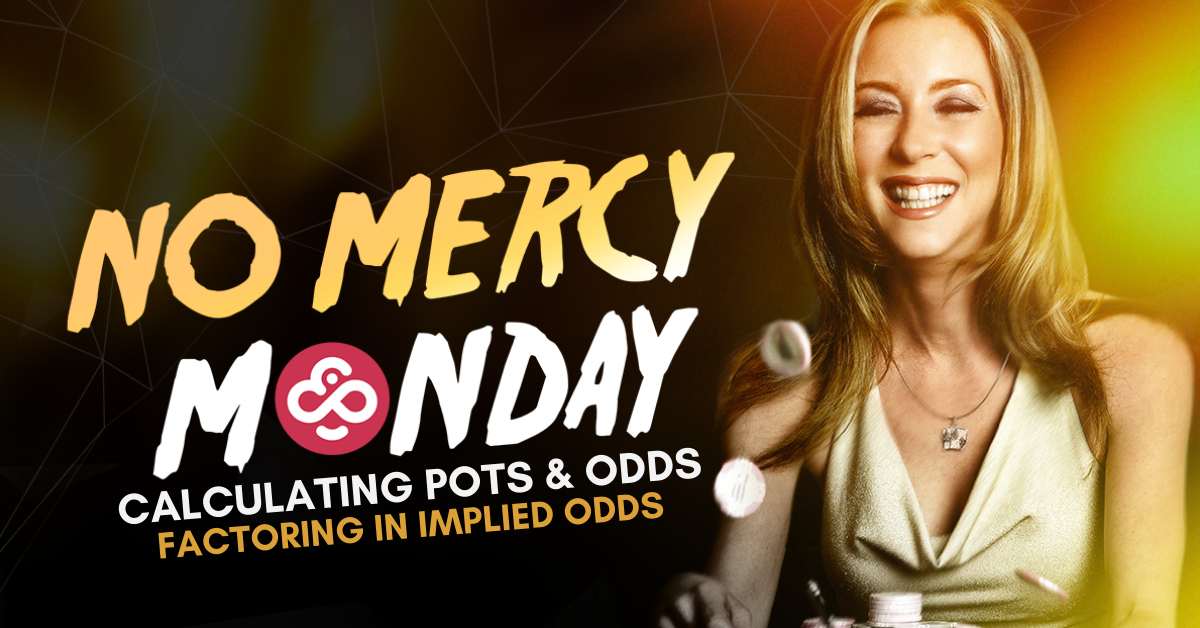 For the past few weeks, we moved on the essential topic of calculating odds. We started with explaining how you can determine your drawing odds, the importance of observation, adapting calculations based on those observations, and went through a few classic drawing odds.

After showing you how to calculate pot odds, and adjust them based on stack sizes at the table, we will be diving into our final chapter on the subject: implied odds.

Implied odds is a term that you might have heard quite often in poker, but what does it mean exactly? Implied odds are an extension of the classic pot odds concept, that we covered over the last weeks. It gives you an idea of how much money you can expect to win if you call a bet or a raise.

The perfect example of implied odds is the following:

Let’s say you entered the pot with

and the flop came

. You decided to call the continuation bet made by your opponent with your top pair to see how the action will unfold on the turn. Fourth street now shows an

, giving you a backdoor flush draw on top of the second pair that you still hold.

This is a perfect example of implied odds, because if your opponent holds an

in his hand and confronts you with a payable bet (in application of the pot odds concepts that we studied), then you will be able to extract a lot of money out of him if you do catch your fifth spade on the river.

Because the flush draw was not there on the flop when you called the first bet, it will be really difficult for your opponent to put you on a flush that came backdoor.

What we call backdoor, is a hand made from the last two cards of the board; the turn and the river. Therefore, it is always surprising to see a player complete his hand on these last two streets, and generally, it will help them win a lot of chips when facing a legitimate hand.

Because of these implied odds generated by the flush draw emerging on the turn, a player could call a bet with pot odds that are slightly higher than the drawing odds.”

Going back to the example with

, one can conclude that because of these implied odds generated by the flush draw emerging on the turn, a player could call a bet with pot odds that are slightly higher than the drawing odds.

It is contrary to the general mathematical rule, but it is validated because he can expect to win a lot more money if he catches his flush card on the river. By opposition, if the flush draw was there since the flop, it would be easy for an opponent to place the player on that specific draw and to fold on the river when the flush comes.

Join me weekly in the Hubble Bubble tournaments and Sunday’s Andromeda events to practice your skills and try to win my 10,000 CHP or 25,000 CHP bounties!