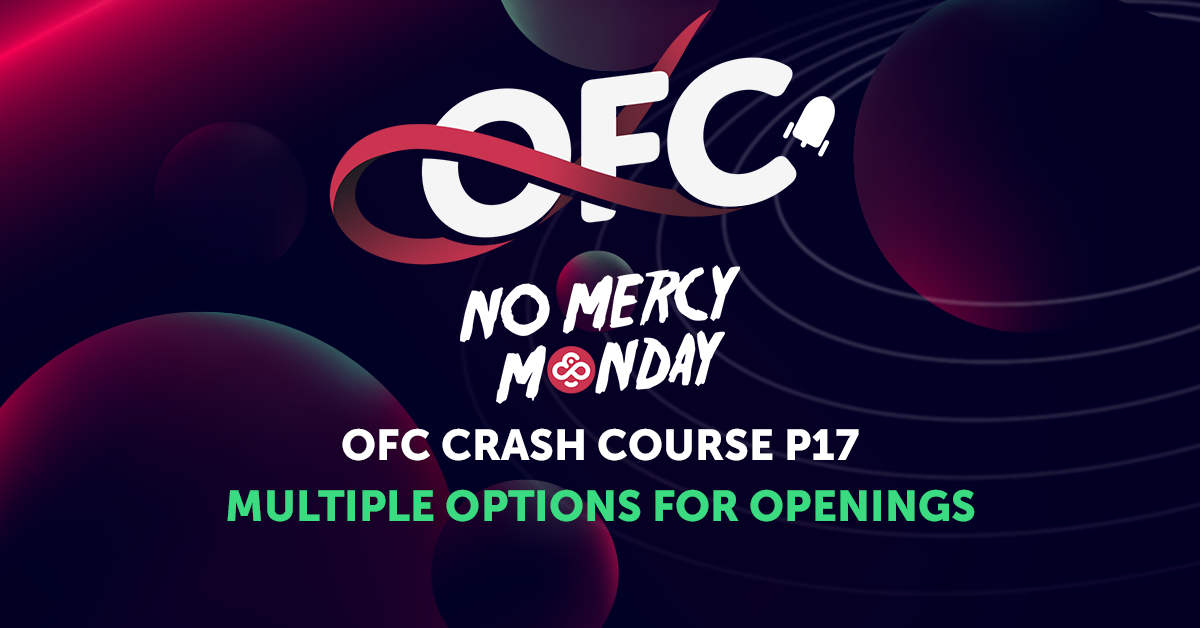 This is already part 17 of this series of tips, and so far, we studied multiple fundamental concepts applicable in Open Face Chinese Poker. Last week, we saw a situation where you received 3 cards flush along with a pair. Let’s focus this week on a similar opening, where you would receive these 5 cards to start:

With these 5 cards, I regularly see players choosing to open in 3 different ways:

If you have carefully read last week’s blog, you now know that the first option is probably not the most effective. Indeed, you will often end up with an invalid board if you don’t complete your flush, you are scarifying a pair that you already have, and you are placing one of your Fantasyland card in the back, instead of on the top row, where it usually belong.

The second option is already better, but the problem with this one is the 8 in the back.

Therefore, if this was a 9, it would go in the back with a pair of 4s, but since it is an 8, then it should go in the middle with the deuce.

So, in this case, the third option is the best opening, leaving the door open to receiving big cards for your back on the next draw, such as 9s, 10s or Jacks. If you chose to keep your 8 in the back, you will be forced to place such high cards in the back along with your 8, instantly killing your chances of making a full house on that line, which is worth a non-negligible 6 points royalty.

Just a final word about being smart and intelligent in your decisions, as we already spoke of in tips number #12 of this series. Let’s say you receive these cards on the next draw on that same hand:

Ask yourself which cards you would choose to place and where you would place them?

Many players will automatically go for the bigger cards, placing the Jack in the back and the 6 in the middle:

While opting for the bigger cards is generally a good guideline, there is more to consider than simply placing the cards on your board and hoping for the best.

Indeed, in this particular case, the Jack in the back is 100% the best play, especially since another Jack is already showing in your opponent’s board. However, since he is also displaying a deuce, chances for you to catch another deuce are smaller than your chances of catching another 6. Since you cannot make trips 6s in the middle without a full house in the back, the best play here will be to place your deuce in the middle:

This choice allows you to have more live cards to make two pair in the middle by catching another 6.

Do not be lazy and look at all the cards out there! Justify every single placement you decide to make, instead of blindly placing automatically your highest cards on the board!

A special thanks to A6pakaga6pa and Pires for this great low stakes’ OFC cash games session in CoinPoker.