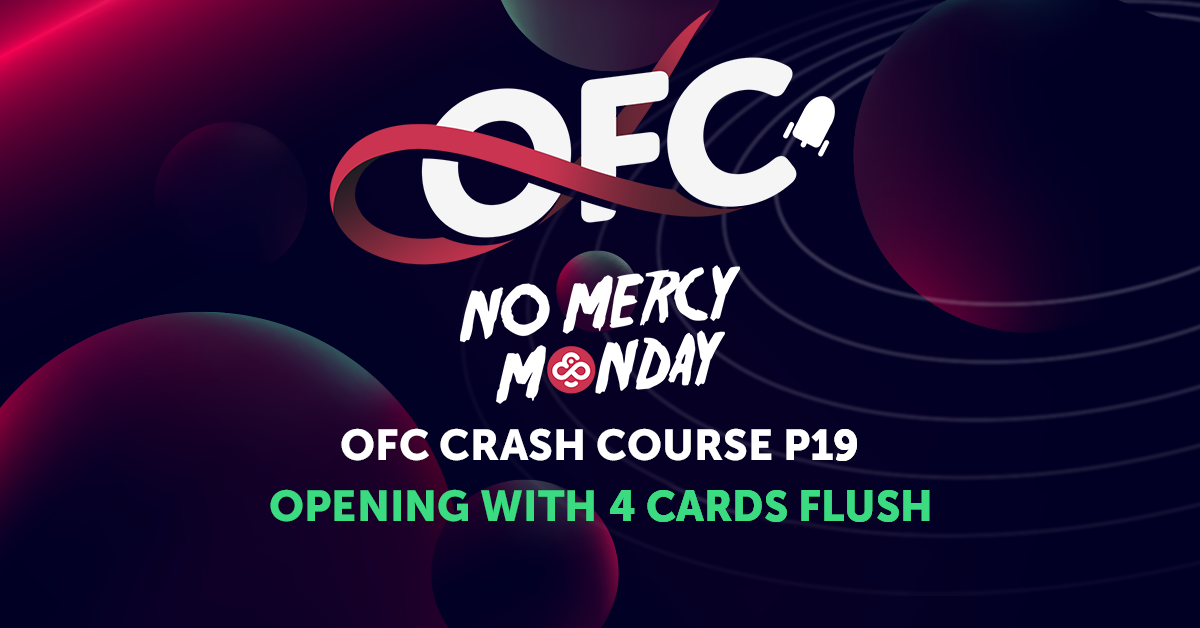 Over the last weeks, we saw how important it was to keep a pair on the same line when you receive it. The examples we saw were cases where you had a choice between going for a flush in the back with 3 cards, while splitting your pair, or keeping the pair on the bottom line and forgetting about trying to make a flush. In most cases, not splitting your pair will be the correct play.

But what if you receive a pair and 4 cards flush draw in your opening?

Let’s go over an analysis of a hand that presented itself to me recently while playing on CoinPoker. I received these five cards to start my board, and I was on the button, which means I got to see 10 cards before making my decision:

With these precise 5 cards, I regularly see players choosing to open in 2 different ways:

There are many things to take into consideration here. First of all, one of our opponents already shows a King, which mean that there are only 2 Kings left in the deck to access Fantasyland, should we choose to place our King on top. Second of all, our other opponent shows 3 cards in clubs on his bottom line, so that leaves us with only 6 clubs, should we decide to draw to the flush as well. Third of all, no one has exposed a 10 yet, so that makes 2 live cards for us to make a pair in the middle with our 10 of diamonds. For all these reasons, the best play here would be to go for the 4 cards flush draw in the back, and to split our pair of 10s.

Be aware that every situation is different and that is what makes this game so beautiful and stimulating! Receiving 4 cards to a flush in opening will often result in going for the flush in the back, but this is not an automatism that you should have. Always look out for the pros and cons in every situation.

On the next draw, I received very interesting cards:

When I say interesting cards, I mean that all my 9s are live, and all my Aces are live, which is quite rare after there are 19 cards exposed out there. Therefore, I could go in two different ways, and both would somehow be defendable:

The first option here is the classic way to go: Flush in the back, Aces in the middle, Queens on top. This would be an automatic placement if the Queens were all live. But as you can observe in one of our opponent’s board, the Queen of club is now dead, which leaves us with only 2 Queens to access Fantasyland. Moreover, it will be really difficult to access it with a pair of Kings, since only 2 Kings are still live.

The second option is less conventional but offers a creative way of play, a little bit like thinking out of the box.

Indeed, with this option, all our 9s are still live to make two pairs or trips, and we still have two 10s that are also live. All the Jacks are live, and two 8s, two 7s, two Queens and two Kings still remain in the deck, which means we could eventually make a straight there. Plus, all the Aces are live to access Fantasyland with that pair on top, not to mention that even without that pair, a sole Ace might make us scoop everyone else with a high card on top.

This was a difficult choice, but without an AI solver such as Pluribus beside me, I had to go for one option or the other, and I chose the conventional way with the Ace in the middle and the Queen on top.

There is at least one considerable advantage with this play, in the sense that if I complete my flush in the back, my board is already valid as my middle line beats my top line, which would not have been the case, if I had chosen to place my 10-9 in the middle and my Ace on top.

Let’s see the next draws on this hand to observe how things evolve. The next cards that I received were the following:

At first sight, it is very tempting to place the Ace in the middle right away. But by taking a closer look, you can count all the clubs out there and you will get to an incredible total of 12 clubs. You know what that means? It means that there is only one club left in that deck. It also means that you have better chances to hit an Ace than a club here.

Moreover, placing the Ace in the back will guarantee you to win that line over those two opponents, as none of them will be able to make a higher flush.

Therefore, the Ace will go on the back for sure. But what about the 9 or the 8? In this case, you can see that there is only one 8 remaining in the deck, as opposed to two 9s, so that card will go in the middle as it is more live. On the next draw, I received the following cards:

At this point and with two Kings and two Queens still in the deck, we want to keep our top line open and beat at least one of our opponents in the middle with two pairs Aces and 10s. Since there is only one Ace live in this deck, it wouldn’t probably be the best play here to place the 10 in the middle and the Ace on top. Keep in mind however that this Ace could get you to win the top lines, which should be a non-negligible aspect of your decision.

For the quick conclusion, after placing my A-10 in the middle, I did receive these cards on the next draw:

As you can see, this is… JACKPOT! My board is now valid, and I am ready to go in Fantasyland!

But, remember the thinking out of the box option?

Just like in NLH, you shouldn’t be result oriented. However, in order to always improve your game and get better, try to think back and see what would have happened if we had done things differently. Remember your previous choices and how it would have affected the entire rest of the hand. By doing this regularly, you will develop a feel for the game, and you will get better and better.