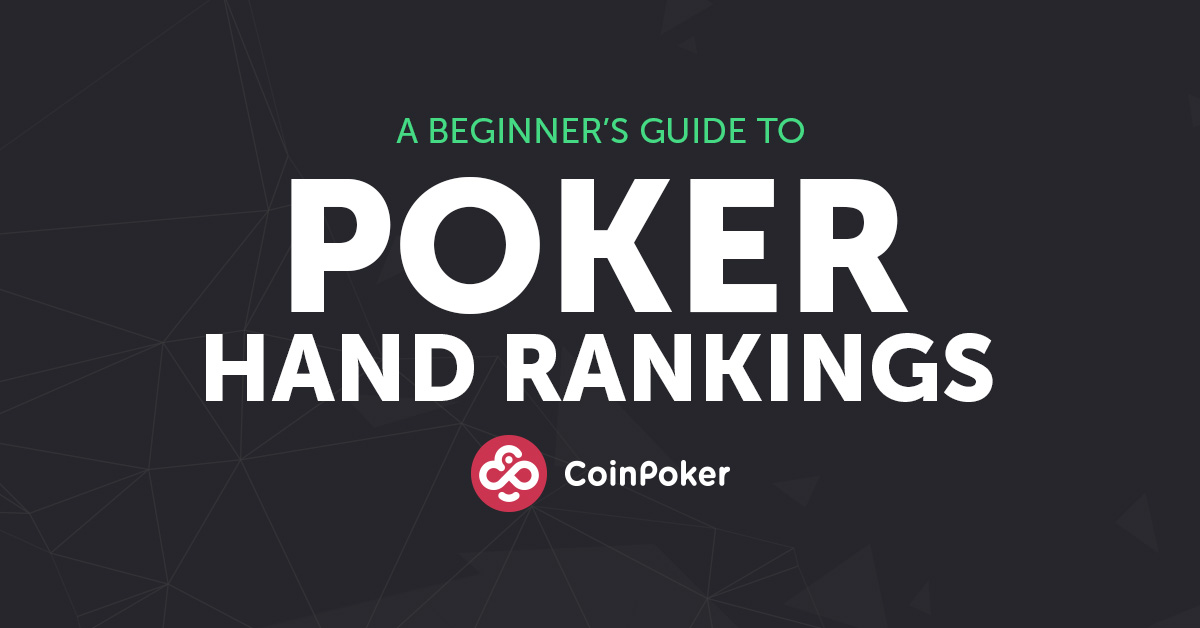 Poker hands and their value, that’s the very first basics you need to learn when playing poker, no matter which variant of the game you play. You need to know how strong your cards are versus your opponents as this is what you base your decisions on, whether to bet, call or fold. As such we have decided to provide you with exactly this, through the ultimate poker hand ranking guide.

As a beginner to the world of poker, there is a lot to learn especially when it comes to poker hands, and how strong they are. Given this, and that we also provide tutorials in “How to play Texas hold´em” and “How to play Omaha” along with Short Deck Poker and  5-card Omaha, we decided to put it all into one post. This will make it easier for you to get a grip on the different hand combinations you can have and how well they would stand against an opponent.

Prior to downloading CoinPoker and start playing, we suggest that you read this post first so you are as prepared as one could be prior to entering a game. Not learning the hand strength or the rules of the game is a must. If not, your chances of becoming a successful player or a winning player for that matter, are slim to none.

Below we have listed all the different poker hands combinations you can have in descending order, from strongest to weakest.

Royal Flush or Royal Straight Flush as some call it, is the best possible hand you could ever get. It consists of an ace, king, queen, jack and ten, all in the same suit.

Following a Royal Straight Flush we have Straight Flush, which consists of five cards in a row in the same suit such as 5-6-7-8-9 of hearts. Were there to be two players who both have a straight flush, then it’s the player with the highest card that wins the pot.

Four of a kind

Four of a kind or quads consist of four cards of the same value, e.g four aces, queens or eights. Where there to be two players both sitting with quads, it’s the player with the highest value that wins. If four of a kind were to be dealt on the board, then it’s the player who has the highest fifth card that wins as poker hands need to consist of five cards. Should both players have the same card value as the fifth card, the pot is then split between them.

A full house consists of two sets of cards, one with three of the same value and another with two cards of the same value, e.g six-six-six and two-two. Should more than one player have a full house, it’s the player with the highest three of a kind that wins.

Five cards of the same suit, e.g all spades or all hearts. If two or more players have a flush at the same time, it’s the player with the highest card in that flush that wins, meaning an Ace would give the player the Nut Flush.

A straight consists of five consecutive cards such as 4-5-6-7-8 in different suits. If two players have a straight, the one with the highest cards wins.

Three of a kind

Three of a kind, trips, or set is when you hold three cards of the same value. If two players both hold a set, then it comes down to who has the highest cards alongside the trips.

Two pair hands consist of two pairs, meaning one pair of one value, and another pair of another value, such as 8-8 and 9-9, that’s two pairs. If two or more players have two pair, the victory then goes to the player with the highest top pair. If that’s the same, then it falls on the value of the second pair.

Two cards of the same rank or value. If two players both have the same pair, such as aces, then it’s the value of the other three cards that decides the winner. The player with the highest side card wins the pot.

High Card is when you have missed the board completely and you don’t even have a pair. If two or more players sit with just high cards, it’s the player with the highest card that wins.

Once you have mastered the rankings, you now have a hand reference to help guide you at the tables. The next step is to learn the basics of whichever game you intend to play, Texas Hold´em, Omaha, Stud or Short Deck just to mention a few.

We have some “How to” guides that will help you with this. Please take look at “How to play Texas hold´em” or “How to play Omaha” along with Short Deck Poker. After this, you should have a basic knowledge of the game, and with that, ready to sit down at the tables.