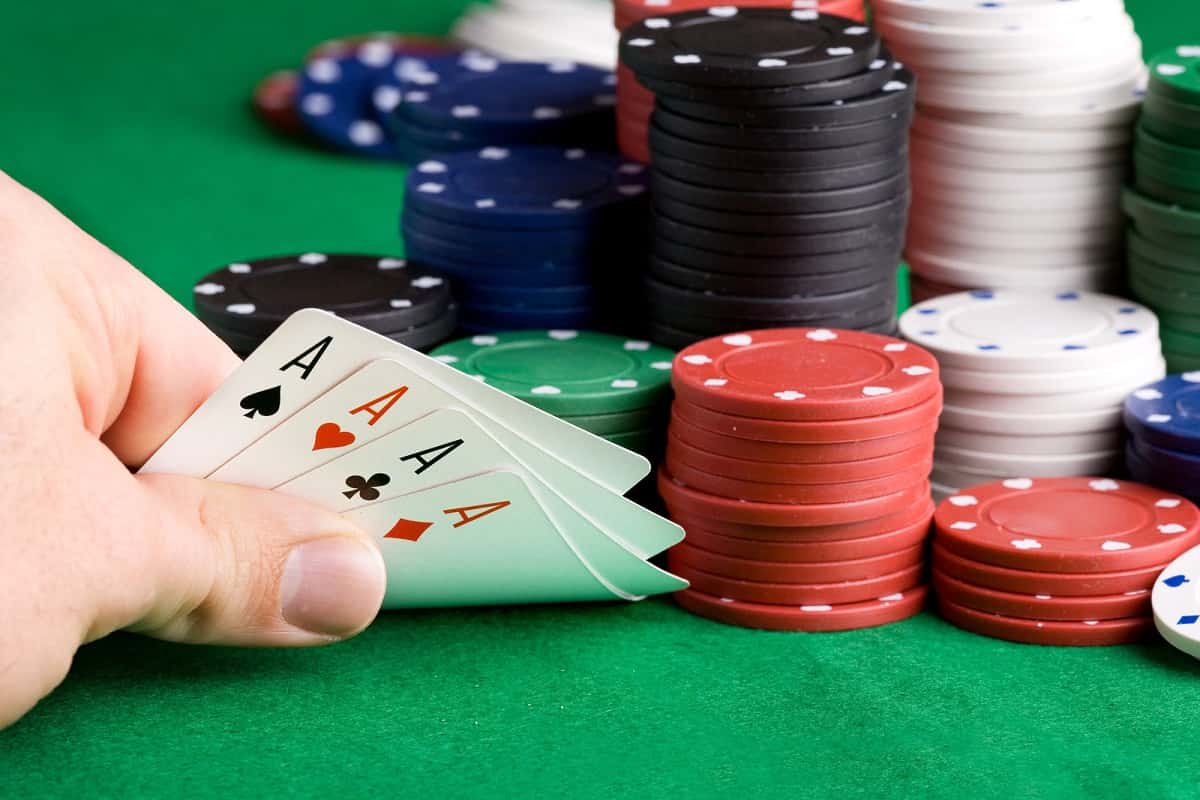 Poker takes but a few minutes to learn but years to master. Many may consider poker as a game of luck, but the skill aspect outweighs the luck factor. Take a look at the Top Rules of Poker that you should never forget.

To be good at poker, one first needs to learn the basics of the game. This means learning the rules of the game you wish to play. The majority of the different styles of poker share common rules.

There are however slight variations depending on which type of poker you choose to play. You have Stud Poker, Omaha, Hold´em, or Open Face Chinese Poker.

They share some elements while at the same time have individual rules that only apply for that particular poker variant.

The one thing variations such as these have in common is to achieve the best poker hand possible.  If we were to dig deeper into each of these variants, this would become an essay.

Given this, we are only focusing on the two most popular types of poker, Texas Hold’em and Omaha. We will be looking at the basic rules of these two poker games. These are rules you should always remember while at the tables.

We will also be looking at the two different styles of poker, tournament play, and cash games. This is also where we will start.

In a tournament, you pay a fixed amount, nothing more, nothing less. Majority of this amount goes into the prize pool that you and all the other players battle for.

A small portion of the buy-in is taken out by the operator, a fee that is referred to as rake. This is the cost that the room charges for arranging the tournament.

You have two different types of tournaments. One is a freezeout where you pay an entry fee and if you are knocked out, the game is over.

Then you have rebuy, where you have the ability to pay the entry fee again if you were to be knocked out.

The number of times you can do this varies, depending on the set-up. It could be anywhere from one rebuy to unlimited rebuy during the first hour.

In cash games, you do not pay a fixed fee to enter the game. Instead, you sit down at your selected stake. This could be from 1/2 cent tables up to $200/400 tables.

The money you sit down with is all your money meaning you are putting a lot more at stake playing cash games. The rewards could on the other hand also be larger.

This is the fee that the different operators charge to run tournaments or cash games. The amount taken varies from room to room. For tournaments, it is a fixed fee and is usually listed in the tournament lobby.

There it indicates how much of the buy-in is allocated to the prize pool and how much is taken out as rake.

For game games, the rake is dependent on the value of the pot played. It is calculated using a percentage. Additionally, it also accounts for the number of players at the tables and the buy-in levels.

This is usually capped at a maximum amount, again determined by the level you are playing. Meaning the higher you go the more rake is taken out of the pot. Generally, the cap is set at a maximum of $5 per pot, but that is at the very highest limits.

The bankroll is just another word for the amount of money you have available in your account. This should determine the levels you should play. If you have a limited bankroll you should start at the lower tables, slowly build your bankroll.

Once you build it to a certain level, you can then advance to the next level and continue on like this until reaching your desired level.

This goes for both cash games and tournament buy-ins. You could start at the 1-2 cent tables and end up at $1-2 tables after a certain number of months.

For tournaments, it could be that you start with tournaments that cost $1 in buy-in, and six months later you are playing in tournaments with an entry fee of $50 or more.

There are many “golden rules” when it comes to bankroll management. But the one rule that you should ALWAYS follow is, never play with more money than you can afford to lose!

Remember, this is a game consisting of both skill and luck. Even if you are a 95% favorite to win a hand, there is still that 5% luck factor that you cannot ignore.

Here we will be covering some of the rules that both these games have in common. First off, we have the blinds.

This is an amount that each player is required to put into the pot before any cards are dealt by the dealer. You have a small and a big blind. Every player will be forced to place one of these bets during a round. After each hand, the blinds move clockwise around the table.

Not only are these players forced to pay these predetermined amounts prior to receiving the cards, but these two players are also the first two to act during each round of betting, but that is also if they still remain in the hand.

In a tournament, the value of the blinds increases as the game progresses. This is all in accordance with a predetermined schedule. According to the schedule there are levels that last a certain number of minutes.

Once a level is up, the blinds increase in accordance with the schedule. This is to ensure that the game progresses at a decent pace and does not last forever.

The player who has the button represents the dealer at the table. The player immediately to the left of the button is the small blind, followed by the big blind.

Sitting on the button means that this player is the last player to act at the tables giving this player a huge advantage over the others.

Being the last player to act during each round of the hand, allows the button player to evaluate all previous actions and base their decision on this information.

A skillful poker player will utilize this to its full potential, especially in tournaments. When the gameplay is getting closer to the bubble and the prize money that is when the player on the button can put maximum pressure.

This is a feature that is commonly used in tournament play. Ante is just like blinds, a predetermined amount but the big difference between the blinds and ante is that each player at the table has to pay this amount before the cards are dealt.

The slight difference with ante is that tournaments usually do not introduce ante into the gameplay until the game reaches a certain level.

This is simply another incentive to make the game more attractive and speed it up. Just like with the blinds, the ante amount that each player pays is set according to the same schedule as the blinds.

This means that after the ante has been introduced and it is time for the blinds to increase, this usually means the ante also increases.

Once these cards have been received each player has the option to call, raise or fold versus prior action. If you are the first to act, the prior action here is the big blind. Meaning you either call the big blind amount, you raise it where the raise needs to be a minimum of a big blind or you fold.

This is the first round of betting. After the big and small blind and any possible antes have been paid, cards are dealt, and players act.

As mentioned, their options are to call, raise or fold. Once all actions during the preflop betting round have concluded, the remaining players move on to the flop.

During the flop, the dealer places 3 cards on the table, also referred to as community cards. Small blind is first to act if the player remains in the pot. If not, the play continues clockwise around the table amongst the remaining players.

The first remaining player has the option to check or bet, while all others then either check, calls, or raises.

It all depends on the initial player’s action. Once all players have completed the action, the remaining players take to the turn

A fourth community card is dealt and once more the action goes around the table in the same order as post-flop, amongst the remaining players. Again, they are faced with the option to call, raise, or fold, depending on the initial player’s action.

If the initial player checks the following player also has the option to check. If all remaining players check, they take to the river.

The river is the fifth and final card dealt. From the two hole cards in Texas Hold’em and four hole-cards in Omaha, players’ goal is now to get the best possible five-card poker hand they can.

With the final card dealt it’s now time for the final round of action. Again, the initial player has the option to check or bet while other remaining players either check, calls, or raises. Once the last player has acted it is time for a showdown.

Showdown takes place if two or more players remain in the pot, regardless of if it’s a tournament or cash game, Texas Hold’em or Omaha.

The player with the best poker hand according to the poker hand rankings wins the pot and the play continues.

When playing in a tournament, the main objective first is to get into the prize money, then reach the final table, and hopefully win the entire tournament.

The last player left holding all the chips is considered the winner and claims the top prize. This is why so many prefer to play tournaments. A small investment could result in a huge payout if you are lucky enough to bring home the event.

Have in mind, tournaments are very popular, and you are often up against thousands or even tens of thousands of players. Not only will it require you to stay focused and attentive for a long period of time, but you also need to ensure you set aside enough time.

A big tournament with a lot of players can take 10-12 hours of play before it’s completed.

Here is where cash games and tournaments really differentiate from each other. In cash games, it’s all up to you. You decide how long you want to play, what your limit is to win or lose and leave, once either goal or limit is reached.

It could take you ten minutes, it could take an hour but in the end, it is you who decide when it’s time to leave the table.

Remember, no one likes a “hit-and-run” player, someone who sits down, wins a big pot, and then leaves the table straight away. To not be recognized as a hit-and-run player, avoid this at all costs.

This will only hurt you in the end as more and more opponents will take note and refuse to play against you in future games.

Ready to hit the table and practice your skills? Join our community of crypto poker players of all levels by downloading the CoinPoker app. With instant deposits/withdrawals and the best rake in the industry, CoinPoker is the perfect platform to develop as a poker player.