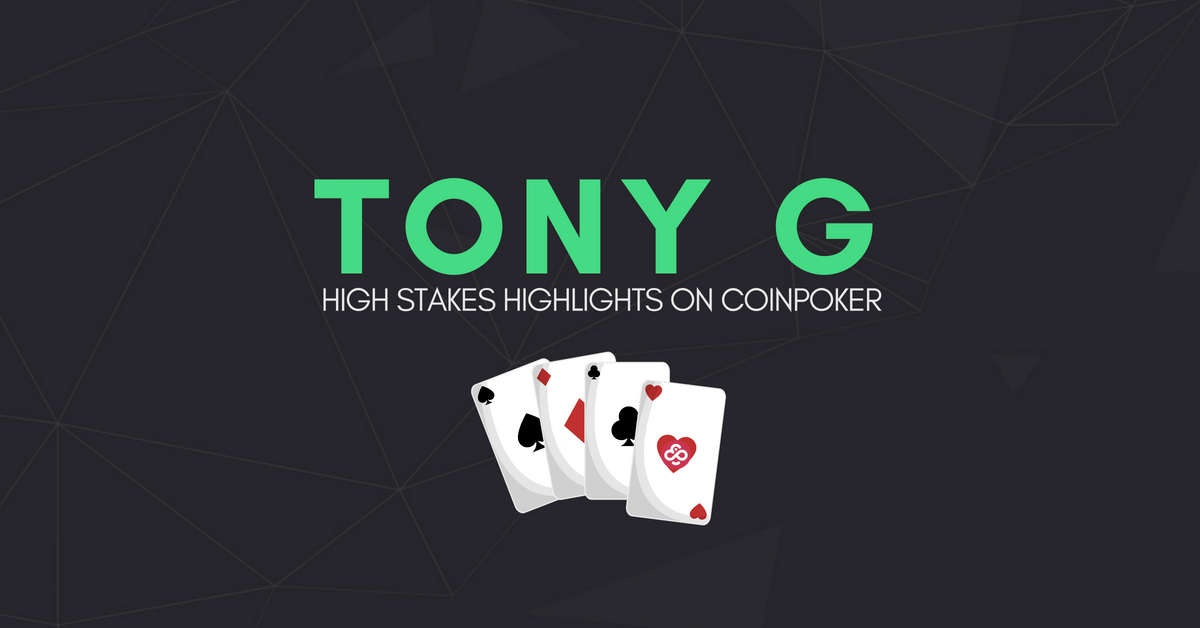 CoinPoker advisor and long-time poker pro Tony G hit our cash games hard last weekend, playing for pots in the millions with our cash game regulars. After noticing the demand from our players for bigger limit tables and more high-stakes action in our lobby, our team thought it was time to deliver.

In case you missed out on the action, we put together the five biggest pots played for by Tony G and other high rollers in the sudden excitement. And as illustrious as Tony G’s poker career has been, quite of few of our own regulars gave him a run for his money. 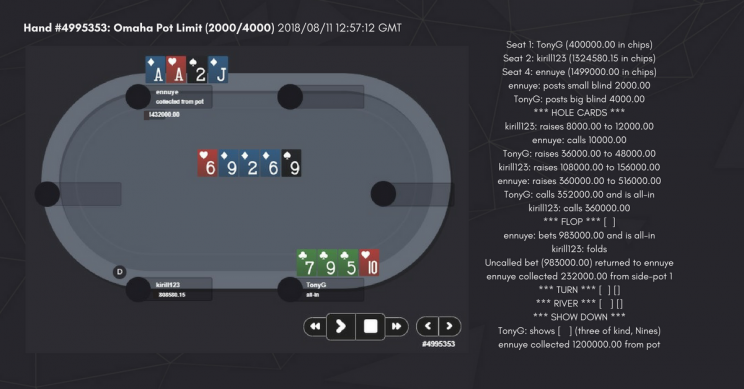 This hand starts with kirill123 raising pre-flop, followed by a series of re-raises that result in TonyG going all-in. kirill123 folds after the flop when ennuye goes all-in, leaving him with TonyG in a showdown holding a pair of Aces against a pair of 9s and a gutshot straight draw until he’s turned a flush that ultimately wins him the pot of 1.4 million CHP.

TonyG, ennuye and kirill123 are seated at the table, but only kirill123 calls TonyG’s pre-flop raise of 7,500 CHP.  After checking on the flop, kirill123 is faced with another bet from TonyG; this time for 22,500CHP.

After calling again, the turn card gives kirill123 the third King. A series of raises and re-raises ensue until kirill123 goes all-in against Tony G’s three of a kind 4s, ultimately winning a 7-figure pot worth 1,666,500 CHP. 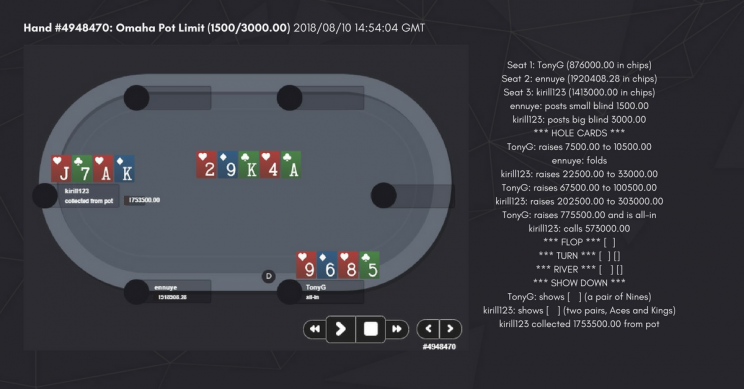 This hand kicked off with a bang as TonyG and kirill123 raised and reraised each other into a showdown before a single community card was dealt.

Ennuye opted out of the action after TonyG made the first raise, and the showdown ultimately led to kirill123 claiming nearly 2 million in CHP with a two pair of Kings and Aces against TonyG’s pair of  9s.

Once again, the pre-flop round comes with raises. kirill123 folds as TonyG raises ennuye’s first bet, followed by yet another re-raise before the flop. After checking, TonyG faces a bet of 144,000 CHP, one that he eventually raises to the pot sized bet of 720,000CHP.

ennuye raises and goes all-in, at this point with a pair of Aces, a nut flush draw and a backdoor straight draw, while TonyG has a few outs with only a straight draw. The turn and river cards give TonyG the second king, but that’s not enough to beat ennuye’s queens and jacks and land him the 1,796,396 CHP on the table. 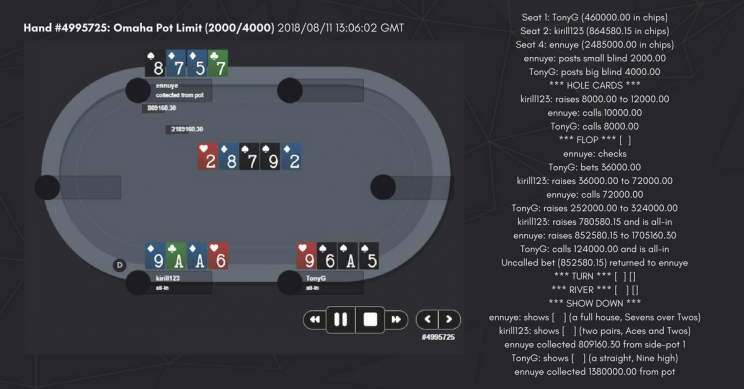 All three players post BB pre-flop, but once the community cards are dealt the bets and raises pour in. Starting with TonyG’s 3,600 CHP bet, the players call and re-raise each other until everyone is all-in just in time for the turn card to be dealt.

The turn brought a lucky straight for Tony, as well as a flush draw to eliminate a few outs from his opponents. While our advisor was in the position to take the biggest pot in CoinPoker history, he still needed to avoid pairing the board.

However, ennuye filled up his full house with a lucky 2 on the river. The final card resulting in a massive 2,189,160 CHP win for him.