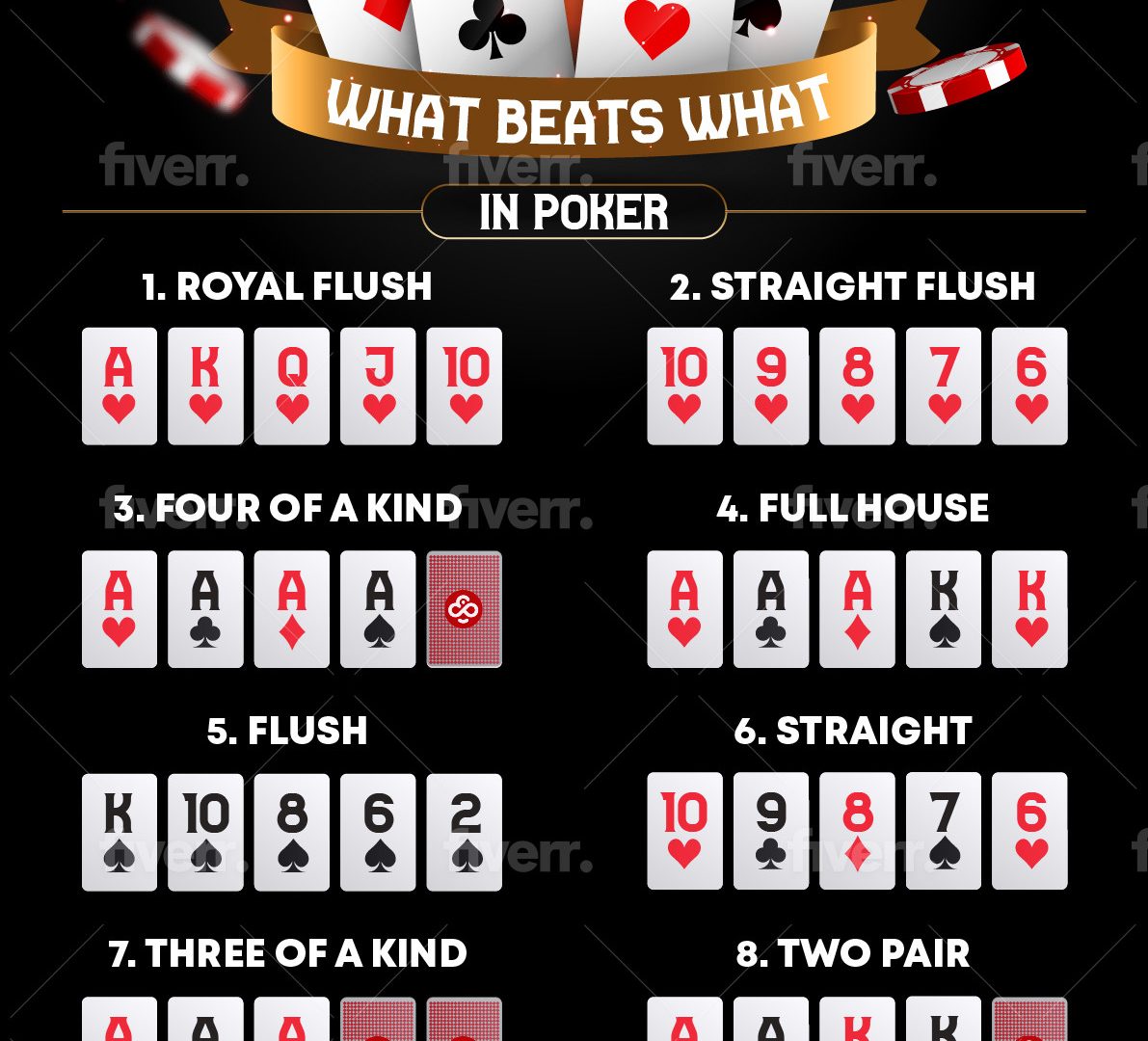 When you start playing poker, it is easy to get confused about which hands are strongest. Pretty much everyone knows terms like flush and straight (you can learn some more poker lingo here and here). But what beats a flush in poker and what beats a straight in poker?

This list of poker hands ranked by strength will let you see which hands are the best ones to aim for and which ones you should be looking to stay clear of.

Thankfully, the same order of poker hand rankings is used in most variants of the game, such as Texas Hold’em and Omaha, so you don’t need to learn a new order before each new game.

If you are going to play an exotic version of poker then you will want to check the rules, first of all, to make sure that this list is what they use in it.

Nothing Beats a Royal Flush

The strongest possible hand in poker is called a royal flush and it involves the 10, J, Q, K, and A of the same suit. This combination of cards simply can’t be beaten by anything else, so if you see one sitting in front of you it is almost certain that you will win the hand.

Many players will never have a hand as strong as this even if they play thousands of games of poker over the years, as the chances of getting dealt these exact cards is an incredible 649,739: 1.

A Straight Flush Can Only Be Beaten By a Royal Flush

The next of the poker hands ranked by how strong they are in the straight flush. This is the name given to a run of five cards that are of the same suit and are all in order. So, it could be something like the 4, 5, 6, 7, and 8 of hearts.

What beats a straight flush in poker? The only hand that is better than this is the royal flush. The possibility of getting five cards in a row in the same suit like this is better than for a royal flush, but at 72,192 to 1 it isn’t something you should expect to see very often.

Four of a Kind Beats Most Hands

You will be happy if you see four cards showing the same number on them, as this is known as four of a kind and is one of the best starting hands in poker. The suits don’t matter, as long as you have four identical cards in front of you.

This is the third-best hand in poker, and if two players have this exact hand the winner will be one with the highest numerical value on their 4 matching cards.

Therefore, if you ask what beats 4 aces in poker, the answer is that only a royal flush or a straight flush can do this. What if two hands have the same cards in them?

In this case, the decision over who wins comes down to the value of the fifth card, which is known as the kicker.

A Full House Comes Next

The next combination of cards on our list of poker hands ranked by how good they are is a full house, which is also known as a full boat.

In this case, you need to get three cards of the same value together with a pair showing a different value on them. It could be 3 4s and 2 Ks or any other combination of numbers.

If two players get the same hand then it is the value of the three-card combo that lets us see who is the winner. If each trio is for the same value, the highest value card in the two-card combo is the deciding factor.

A full house is beaten by any of the hands listed above it here but beats anything that we have put below it. The reason it is below four of a kind is that it is seen a little more often than the other hand.

A Flush Comes After a Full House

We have seen how strong a royal flush and a straight flush are. The flush is the poor relative to these hands, although it is still fairly high up on our list of the best poker hands. In this case, all you need are five cards of the same suit, regardless of the number on them.

Of course, they aren’t in order, or else it would be a straight flush or royal flush.

This could be 2, 5, 8, 9, and Q, or any other combination provided that they all feature the same suit on them. What beats a flush in poker?

Given the seemingly random combination of numbers it can contain, you might be surprised to see that this is the fifth strongest hand in poker.

Get five cards in order but from a mixture of suits and it is called a straight. You could have 5, 6, 7, 8, and 9, for example. If all of these were from the same suit that would be a straight flush.

However, we are looking at a situation in which they are from two or more different suits, which reduces the strength of the hand considerably.

The next question you need to ask is what beats a straight in poker. We have seen above all of the better combinations of cards that you will be happier seeing in this game.

Yet, a straight can still be a good hand, taking into account how infrequently you can expect to see the hands that are better than it.

Three Of a Kind

You only need three cards with the same number on them to get this type of hand. It could a set of 3s, 8s, or any other card.

The only difference that the number on the three cards makes is if it is a tie, with someone else at the table also getting three of a kind. When this happens, the highest card value wins.

In the case of a tie on the 3 matching cards, the highest-ranking fourth card is the deciding factor, and if they are the same then it goes to the fifth card. You only need to look at the earlier entries to see what beats 3 of a kind in poker.

The odds of getting this mixture of cards is about 46 to 1, so it is the kind of combination you should see reasonably often.

Having two pairs in the same poker hand might seem quite impressive, but it comes pretty low in the list of poker hands ranked by chances of winning.

The odds of you getting this exact hand is 20 to 1 and it can be made up of any paired numbers.

When two players each have a couple of pairs, it is the higher-ranked pair from each hand that is used to try and determine the winner.

If this doesn’t settle the matter, we then need to look at the lower pair and then the final card, or kicker.

A Pair Can Only Beat Another Pair Or a Highest Card

If you have only a single matching pair of cards in your hand then it comes after two pairs on our list but before the final entry. This isn’t a particularly strong hand, although the higher the value of the cards, the better your chance of winning.

You will also want to see high numbers on the other three cards, as these are the kickers that will be used to work out who the winner is if there is more than one player with a pair.

This certainly isn’t one of the best starting hands in poker and you will want to create at least a pair if you start with this poor mixture of cards.

The best card in this respect is the ace, while the 2 is the lowest. If you can only produce this hand then your chances of winning are pretty low, as it is rare to see this sort of hand win.

The only hand you can beat is another that doesn’t have any combination listed above and whose highest card is lower than yours.

What Should You Do Now?

It makes sense to try and memorize this list of all of the possible winning poker hands ranked by order.

That way, you will speedily and automatically be able to work out how strong your hand is and what your opponents would need to beat you.

This should become second nature to you after a while, but at first, you might need to put some thought into it.

One of the advantages of playing online is that you can keep this page open for whenever you get a new hand and want to quickly check what other type of hand it could beat.

Start putting your new knowledge into practice by playing some poker games at CoinPoker and seeing whether you can get any of the best hands that we have looked at here.